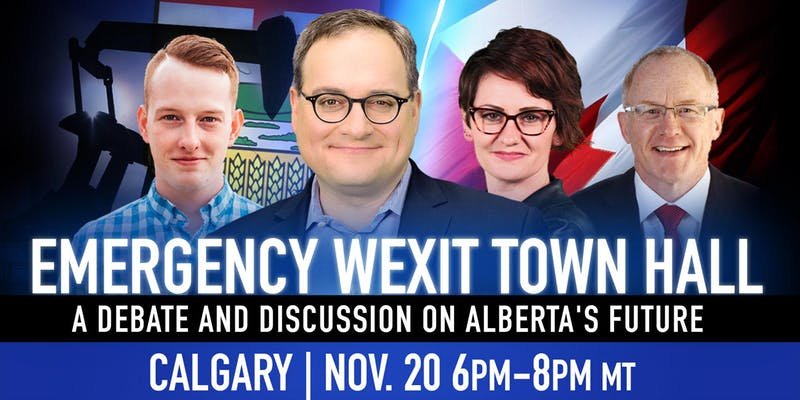 Wexit. What is it and what should be done about it? Is there still a place for Alberta in Canada? Join Rebel News to discuss. About this Event For about 24 hours

Wexit. What is it and what should be done about it? Is there still a place for Alberta in Canada? Join Rebel News to discuss.
About this Event

For about 24 hours after the election, Justin Trudeau pretended that he’d listen to the west. That didn’t last long.

Trudeau’s back with a vengeance — and an even more extreme group of Liberal MPs. What’s worse, he knows he has to court the Bloc Quebecois to stay in power, and their radical new leader doesn’t even pretend to like westerners.

It’s going to get worse.

So what should Alberta and the west do?

Roll over and play dead — like the CBC recommends?
Try to “reform” things from within, like Preston Manning once advised?
Have a referendum to get out, like Quebec tried to do? Either to go it alone, or in some arrangement with the U.S.?
Or is Jason Kenney on the right track: to revive the firewall idea, and try to take back everything the constitution allows?

Those are some of the ideas we’ll talk about next week in our Emergency Wexit Town Halls.

Join some of Alberta’s strongest advocates — Lorne Gunter (Edmonton Sun), Sheila Gunn Reid, Keean Bexte, and Ezra Levant — to talk about where to go from here.

We’ll have lots of great Wexit and Rebel gear for sale too.

Question and Answers after discussion.

WHAT: Wexit debate and discussion.